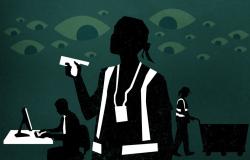 Surveillance of employees in the workplace through the use of advanced technology represents the latest phase in the long history of capitalism to maintain control of workers and to increase productivity through intensified forms of exploitation. Is surveillance capitalism an updated version of Big Brother or something even more sinister? Does it really increase productivity? Are workers accepting of surveillance? And how do we ensure that surveillance capitalism does not completely wipe out privacy and individual rights? In this interview, Ivan Manokha, a lecturer at Oxford University and a leading scholar in surveillance studies, offers penetrating insights into the above questions.

Ivan Manokha: The key distinguishing feature of capitalism is the existence of a labor market, i.e. in capitalism human labor is commodified — it is bought and sold in a market place. From the point of view of employers, purchasing labor represents a production cost, and their objective is to make sure that it is utilized to the maximum of its productive potential. This, in turn, requires surveillance and it may be observed that capitalism as a socioeconomic system has always involved workplace surveillance for this reason.

It is actually misleading to use the term “surveillance capitalism” following, in particular, the work of Shoshana Zuboff, now widely employed to refer to the current phase of capitalism with new — digital and biometric — technologies entering the workplace. Capitalism has always been “surveillance capitalism” because in this system the main objective of any business activity is to maximize profits — to make sure that the resources purchased and employed — including labor — are used with the maximum efficiency.

The function of new technologies, as this has always been the case with respect to workplace surveillance, is to seek to maximize worker productivity. This may be achieved in two ways: by extending the amount of time that employees work (e.g. by reducing the duration of breaks, by extending hours of work in the workplace or encouraging employees to work from home after the end of the working day, etc.), or by intensifying the labor process (the speed with which workers move, the number of tasks they complete per unit of times, etc.).

Modern workplace surveillance technologies have the potential to enable employers to do both: to monitor more precisely and continuously the time employees spend to actually work, including the timing of lunch and toilet breaks, as well as to better scrutinize and measure their performance (continuously measuring output, developing performance scoring systems and rankings, etc.).

Here a special mention needs to be made of the so-called “platform labor” — the rise of different digital platforms that bring together clients and “independent contractors,” the euphemism platforms use to refer to their laborers and service providers. They do not know their workers and have to rely on various indicators of performance to measure and compare their productivity, and the central role here is played by customers who perform the role of proxy managers — they evaluate and rank the performance of workers (e.g. of Uber drivers, of cleaners of TaskRabbit, etc.). In short, new workplace surveillance technology is used to improve the capacity of employers to monitor employees, something that they have always done.

How do they differ from past workplace surveillance, and even from surveillance techniques under authoritarian and former communist regimes?

The main difference resides in the shift from surveillance based on the “gaze” — on the capacity of supervisors, foremen, managers, etc. to visually monitor workers — to surveillance that is digitalized, i.e. that goes beyond the “gaze” and involves the collection of all kinds of data. This shift greatly enhances the capacity of employers to monitor employees. Thus, if in the past workplace surveillance was limited to the time that supervisors were actually looking at workers, today the use of different types of new equipment (RFID badges, handheld devices carried by employees, and even implanted microchips) makes surveillance continuous.

In addition, the data may be processed in real time and managers on their KPI [key performance indicators] screens may see not only the productivity of each employee, but his or her ranking in comparison to others. For employees this means that there is no breathing time and there is no place to hide — everything may be monitored, recorded, processed and analyzed.

Concerning the second part of the question, there is indeed an Orwellian aspect to it in that new means of workplace surveillance make it totalizing — literally every move of an employee may be surveilled and, what is more, transformed into digital data that may be analyzed in ways that workers do not control and do not know of (e.g., what kind of algorithm is used to calculate performance, what is involved in the construction of a historical trajectory of performance, how will the results be used by managers, etc.). Thus, there is indeed a certain similarity with secret services in authoritarian societies, particularly the totalizing nature of surveillance and a high degree of arbitrariness that may be involved in treating and using the information obtained.

At the same time, let us note once again that this in itself is hardly new; it has always been the case that “democracy ended at the factory gate”; what has changed is the means and the degree to which workplace surveillance may be enhanced by new technologies.

No general definitive conclusion may be reached; what is required is a concrete empirical analysis of each particular technology in each particular industry. What we may observe, however, is that in many industries workers are pushed to the limit of their physical and mental capacities. For example, warehouse pickers at Amazon have only a few seconds to find an item, pick it, and then immediately run to fetch another one, and so one, having to walk over 20 kilometers each day.

Going back to the distinction between extending working hours and intensifying the work as a means of increasing performance, it is clear that new technologies do enhance the ability of employees to do the former, and I would say that may, in many cases, also contribute to the latter. This, however, comes at a price of worker exhaustion, both physical and mental, and may lead to burnouts, depressions or illnesses related to stress.

Is surveillance a value-neutral activity that may be used for good and bad purposes, or is it always problematic?

It is common to cite Melvin Kranzberg’s dictum that “technology is neither good nor bad; nor is it neutral” with reference to technological innovations, and to add that it all depends on the context and the use to which they are put. Surveillance technologies are no exception. They may be enabling and liberating (e.g., using wearable technology to locate miners unable to get back to the surface after an accident, monitoring health of patients at a distance, filming police brutality, etc.), but they may also be used to increase subjugation, oppression and exploitation.

What we may say is that, overall, surveillance technology is more likely to serve the interests of the powerful(because they have bigger capacity and means to put it to use that they desire), be it governments, corporate managers or digital platforms. In this respect, what is important is to focus not on surveillance technology in the abstract, but on concrete existing power relations and examine how they are affected by new means of surveillance. Thus, when we speak of workplace surveillance, it is undeniable that they have benefited employers and have greatly increased their relative power over employees.

Some recent data seems to indicate that employees are accepting of surveillance. Why would employees accept surveillance, and shouldn’t unions make privacy concerns part of the collective agreements?

To begin with, we do not really know whether employees are really OK with it. The fact that they do not openly oppose its deployment and do not organize protests does not necessarily mean that they are willingly accepting it. There may be other reasons for not challenging the introduction of new workplace surveillance technologies (fear of losing a job, of being not well seen by managers, or of simply compromising one’s career, etc.). However, it may be suggested that in part the lack of protest may be due to a more general spread of surveillance and data collection in our societies.

We are used to banks gathering data on our transactions and giving us a credit score, to online shops storing our details and targeting us with products that we are likely to purchase based on our profile, to our smartphones tracking our movements, to CCTVs in the streets and biometric passport scanners at airports, etc. Now, such technologies are also present in the workplace and perhaps for many it is just something that seems unavoidable, a phenomenon that is uncontrollable. This, however, is not the case and it is important that unions take this issue seriously and attempt to control the spread of new workplace surveillance technologies.

It is crucial to note that it is not just about individual privacy; modern surveillance usually raises privacy concerns but privacy is indispensable to the exercise of a whole range of other rights (freedom of association, the right to vote, freedom of expression, etc.). The violation of workers’ privacy may thus have an impact on their right to be free from discrimination and to have equal career opportunities, and to the right to form trade unions. It is thus important that unions do not underestimate the risks of new workplace surveillance and attempt to at least put certain limits on its use by employers.

C.J. Polychroniou is a political economist/political scientist who has taught and worked in universities and research centers in Europe and the United States. His main research interests are in European economic integration, globalization, the political economy of the United States and the deconstruction of neoliberalism’s politico-economic project. He is a regular contributor to Truthout as well as a member of Truthout’s Public Intellectual Project. He has published several books and his articles have appeared in a variety of journals, magazines, newspapers and popular news websites. Many of his publications have been translated into several foreign languages, including Croatian, French, Greek, Italian, Portuguese, Spanish and Turkish. He is the author of Optimism Over Despair: Noam Chomsky On Capitalism, Empire, and Social Change, an anthology of interviews with Chomsky originally published at Truthoutand collected by Haymarket Books.

This was reposted with permission from Truthout.