The open Amazon and its Enemies: A Call for Action and Optimism 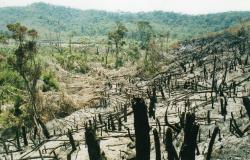 The Amazon, now on fire, has become the central political and geopolitical hot spot for humanity's right to its own future. Optimism is the gasoline that must feed the fight. Español Português

June and July have been the hottest months on record in the Western Hemisphere as the climate crisis escalates. This summer, the ice in Greenland has been melting at an unseen rate under an unprecedented heat wave. Droughts and wildfires are on the rise ravaging significant forest surfaces, and the role of the rainforest as a carbon dioxide absorber is being jeopardized by a substantial acceleration in deforestation efforts.

The Amazon basin, which contains 40% of the world’s rainforest, plays a very complex yet central role as a buffer of climate change. It functions as a cooler of the atmosphere through moisture evaporation and it produces its own rainfall in the dry season while also capturing carbon and acting as the Earth’s lungs.

But lately, the Amazon’s vulnerability has become apparent, as fires have been spreading at an unprecedented rate. As Leonardo DiCaprio put it to his 34 million Instagram followers in a post: “the lungs of the Earth are in flames.” Data released by Brazil’s National Institute for Space Research shows that from January to July, 4.6 million acres of the Brazilian Amazon went ablaze, a 62 percent increase over last year. We are facing a full scale ecocide case here.

Overall, the basin is experiencing an increasing number of threats from “development” involving logging, mining, farming, ranching and infrastructure construction (road and dam building). At the beginning of August, the latest in a series of reports from the UN’s Intergovernmental Panel on Climate Change focused on the impacts of agriculture, deforestation and other land use on the environment.

“Climate change, including increases in frequency and intensity of extremes, has adversely impacted food security and terrestrial ecosystems, as well as contributed to desertification and land degradation in many regions,” the report states. To slow global warming, the UN report warns, agriculture and cattle ranching must change. This conclusion holds political undertones as agriculture and cattle ranching support many capitalist world economies.

Today, one cannot talk about the Amazon without talking about local, regional, and global politics.

Since Jair Bolsonaro, a far right-wing politician, was elected president in Brazil and took office this past January, many of the policies put in place to protect the Amazon over at least the past two decades are being paralyzed or reversed, while “trees have been disappearing at a rate of two Manhattans a week.” As The Economist writes in its first week of August issue, Deathwatch for the Amazon: “If there is a green shot in Mr. Bolsonaro’s scorched-earth tactics towards the rainforest, it is that it has made the Amazon’s plight harder to ignore”.

With the Amazon ablaze since January, the issue can no longer be avoided by the international community. “The ongoing forest fires in Brazil are deeply worrying,” the European Commission said in a statement last Thursday. “Forests are our lungs and life support systems.”

The fact that the international press has joined activists and has become more aggressive on the issue of the climate crisis and the Amazon, acknowledging that this is a political issue and that it has to be approached as such, is progress. Journalism has a key political role in preventing the furthering of this catastrophe and it must be used to its fullest extent. And yet, when journalists working in the Amazon talk about politics, we discuss the people living there.

One should recall that the Greek root of politics is “polis” meaning city, which produced the word “polités” meaning citizens. And when one talks about the people living in the Amazon, be they indigenous, riberino (river dwellers) or quilombolas (escaped black slaves’ descendants), one should not forget that these people are all citizens of the Earth; citizens, just like most of the readers of this article.

Yet, being citizens means having equal rights, and when we investigate in this part of the world and meet indigenous riberine or quilombola people, we must overcome our neocolonial, Western-centered and often racist prejudices. We must always bear in mind that they are our equals and that they are as much citizens of this world as we are, even if their lives are different from our own.

This concept of global citizenship seems obvious from an intellectual point of view. However, it is not so straightforward. There is a severe contrast between our urban, technology-driven lives and their traditional, ancestral and analogic world. An effort should always be made to bridge cultural gaps, but that has become increasingly difficult for young generations born in the urban digital world.

Yet, as journalists working in the Amazon basin, our priority should be putting people at the center of our approach, which must be, above everything, humanistic. Yes, humanistic in the sense expressed by the ancient Greek philosopher Protagoras who said, “Man is the measure of all things,” but also humanistic in the sense of bringing together different concepts of knowledge and disciplines.

The term humanist can also be interpreted as having an interdisciplinary perspective. One cannot approach such a complex and interconnected system as the Amazon from only one discipline, for to cover the Amazon means to be able to consider many disciplines. From geography to economics, ecology to anthropology, history to sociology, and engineering to environmental and climate sciences. But, above all these disciplines, it is key to acknowledge that in the Amazon, when any kind of scientific or journalistic work is performed, people and politics are involved.

The Amazon is so key to the future of our planet that it has become a hot issue of geopolitics. And, we are not only talking about the physical environment. We are talking about the future of the people- those who live there and us. And, above all, when we talk about people, we talk about values. We need a humanistic and value-oriented approach when working in the Amazon to solve the issues developing in the area.

Yet, with a president like Bolsonaro, who considers the Amazon a commodity to deplete and export, and its people as leftists who refuse to integrate into his development mirage, we have to agree that the root of this issue has to do with human rights. What we are witnessing in the Amazon is a natural and human rights violation. But also, and most importantly, it is the violation of the right of humanity to exist in the future. So, it is not an exaggeration to sustain that, should Bolsonaro pursue his vandalistic approach to the Brazilian rainforest, he should be brought to justice by the international court.

The fact that the Amazon has become significant as it occupies an increasingly central position in the spotlight of global media gives room for some optimism. Karl Popper, the Austrian philosopher who was very influential to science with his theory of falsification and its implications to the methodology of scientific research, was an optimist. He said something which is of key importance today, and that is that “optimism is a moral duty.” For him, the future is not written, but rather depends very much on what we do in the present.

Our duty is to be optimistic as a way to shape a better future for all.

And, optimism is what is found in Open Democracy’s Rainforest Defenders series, produced with photojournalist Pablo Albarenga and the people from the Brazilian environmentalist NGO Engajamundo down in the Tapajós River with the support of the Rainforest Journalism Fund, administered by the Pulitzer Center in Washington.

In producing the series, Open Democracy put young people at the center of the stories, allowing them to speak about their struggles, frustrations, hopes and views for a better world. And, in spite of the many difficulties they face daily, we found optimism in them after all.

As Brazilian journalist Eliane Brum has said, the Amazon and its people are in the center of the world. We have to stand by their side, and hope they can accept us alongside them in the fight.

Francesc Badia i Dalmases is editor of DemocraciaAbierta and a journalist. A political analyst, an author and a publisher, he specializes in International Affairs and is a Pulitzer grantee. Born in Mexico and based in Barcelona, Francesc has been senior fellow and general manager at the Barcelona Centre for International Affairs (CIDOB), general manager at the European Institute of the Mediterranean and at the Interarts Foundation. He was executive director of URB-AL-III, adecentralised and urban cooperation program for Latin America of the European Commission. Follow him on Twitter: @fbadiad

This article was originally published on Impackter, it is based on the speech delivered by the author on July 11, 2019, in Manaus (Amazonas / Brazil) during the first meeting of the Rainforest Journalism Fund which funds reports in the Amazon and other tropical forests, in partnership with the Pulitzer Center.

It was reposted from:

Coronavirus: Three Ways the Crisis may Permanently Change Our Lives