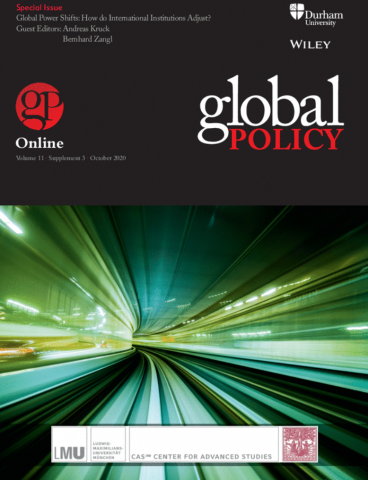 Shifts in the international distribution of power create an impetus for institutional change. As powers such as China rise and powers such as the US decline, international institutions come under pressure to adapt to new power realities. Yet, the pathways to institutional adaptation vary considerably. What is more, sometimes attempts at institutional adaptation are successful and sometimes they fail. To contribute to a better understanding of such events, this special issue theorizes states and institutions' responses to global power shifts, and provides case studies that explore their attempts to adapt to new realities, gain legitimacy for their actions, cooperate with and see off competitors. Its contributors also discuss the broader implications of their research for the future of the international order and the management of global power shifts.

The Adjustment of International Institutions to Global Power Shifts: A Framework for Analysis - Andreas Kruck and Bernhard Zangl

The Integration of Emerging Powers into Club Institutions: China and the Arctic Council - Matthew D. Stephen and Kathrin Stephen

Revolution from the Inside: Institutions, Legitimation Strategies, and Rhetorical Pathways of Institutional Change - Stacie E. Goddard