Why are Azerbaijanis fighting for Karabakh? The Trauma and Burden of the Forgotten Exodus 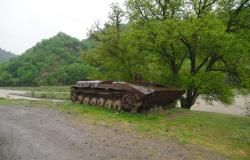 The immense plight of Azerbaijan’s internally displaced persons (IDPs) must be recognized and tackled for long-term peace.

Following OSCE-mediated talks between foreign ministers of Armenia and Azerbaijan in Geneva on October 30, the conflict sides agreed to cease shelling of residential areas amid intense fighting in the Nagorno-Karabakh conflict. As the Co-Chairs of the OSCE Minsk Group continue their efforts to “find a peaceful settlement of the conflict”, here is a key point they need to know if they want to offer a much-needed long-term solution.

On September 27, 2020, armed hostilities escalated in and around Nagorno-Karabakh, a mountainous region of Azerbaijan with ethnic Armenian majority. The flare up followed 26 years of OSCE-mediated negotiations that failed to resolve the ethno-territorial dispute between Armenians and Azerbaijanis over the region. What began as inter-communal violence in the late Soviet period turned into a full-fledged war between post-Soviet republics of Armenia and Azerbaijan in 1992-1994. By 1994 ceasefire, given tacit support from Russia and internal power struggle in Azerbaijan, Armenian forces occupied not only Nagorno-Karabakh, but also seven major Azerbaijani provinces surrounding it.

The forced exodus of Azerbaijanis from their ancestral lands and the Armenian leadership’s refusal to implement the right of displaced persons to return to their homes undermined international law as the frame of reference, thus boosting maximalist voices on both sides.

In the late Soviet period, the former Nagorno-Karabakh Oblast [NKAO] had a population of 189,000 with 77% ethnic Armenians and 22% ethnic Azerbaijanis. While the Karabakh’s administrative capital city Stepanakert (Khandkendi) was Armenian dominated, the city of Shusha – the cradle of Azerbaijani cultural production – had a predominantly Azerbaijani population. Not only all Azerbaijani families were evicted from towns like Shusha, but their cultural heritage has been systematically eliminated.

The seven Armenian occupied regions beyond Nagorno-Karabakh had an overwhelmingly Azerbaijani majority. But the ethnic expulsion following the de facto annexation (PACE) displaced some 780,000 Azerbaijanis in their own country, on top of the 40,688 IDPs from NKAO, and more than 200,000 Azerbaijanis who fled Armenia. Today, refugees and IDPs comprise about 13 percent of the country’s population, and, as of 2016, one in 15 Azerbaijanis was a refugee or IDP. [On the Armenian side, some 300,000 ethnic Armenians fled from Azerbaijan.]

These are not refugees from a foreign land, these are dispossessed people in their own country. Most IDPS live in public buildings, dormitories and temporary shelters and other forms of substandard housing. The poverty rate among IDPs in the early 2000s was close to 75%, according to a World Bank report published in 2010. Moreover, many IDPs and their relatives suffered psychological trauma that, has over decades, accumulated and morphed into the sense of societal frustration and despair. Experience of living in the “most deplorable conditions” has shaped their and their offspring sense of injustice. Despite harsh livelihood conditions, many remained hopeful of an eventual return.

However, they cannot return to their homes due to the Armenian government’s resettlement and administrative policies incorporating the seven adjacent districts of Azerbaijan and the former NK Oblast into the self-declared “Artsakh Republic” (OSCE Field Assessment Mission 2011) “which no member of the international community – including the co-chairs [of the OSCE Minsk Group – France, Russia, the USA] recognize as an independent state” (OSCE 2006). About 15,000-17,000 Armenian families were relocated into the adjacent territories. Among the new settlers, some 20,000 Syrian refugees were settled in Armenia and Nagorno-Karabakh (as of 2017). Despite the belief that “it was ethnic Armenians’ ‘moral right’ to settle land that centuries ago was part of the Kingdom of Greater Armenia”, settling civilians in an occupied territory is considered a war crime by the Geneva Conventions. Consequently, the OSCE Minsk Group co-chairs urged Armenia, albeit in vain, to put an end to new settlements.

The war and the plight of IDPs was a real humanitarian catastrophe with a major spill-over effect over the rest of the population who are also traumatized by the humiliation and forced status quo. The influx of IDPs to Azerbaijan has had adverse socio-economic impacts and a big burden on its economy. Azerbaijan has been spending about 3% of its state budget annually on IDP needs.

Despite continued calls by international organizations (PACE Resolution 1497 in 2006; the UN General Assembly in 2008; the European Parliament in May 2010) to withdraw Armenian troops and allow peaceful return of IDPs, the Armenian government failed to implement those resolutions. The UN General Assembly in 2008, for example, “reaffirm[ed] the inalienable right of the population expelled from the occupied territories of the Republic of Azerbaijan to return to their homes”.

The failure of the OSCE Minsk Group for three decades to negotiate a diplomatic solution contributed to the sense that mediators are working to “freeze” the unacceptable (for the Azerbaijani side) status quo rather than resolve it. The perceived inefficiency of diplomacy, adding to already high levels of anxiety and psycho-social distress, dashed the Azerbaijani IDPs’ hopes to eventual return to their homes. Denial of IDP rights to return made the “no war no peace” status quo untenable. An increasingly militaristic posturing by the new leadership of Nikol Pashinyan and the so called “Tonoyan doctrine” of “new war for new territories” undermined any hopes for peaceful solution.

As the leaders gather to discuss possible solutions, it is important to be reminded about the Madrid Principles that envisage the return to Azerbaijan of all the territories surrounding Nagorno-Karabakh that the Armenian forces keep as a “security buffer” and the right of those displaced from the conflict to return to their homes, security guarantees for the people of Nagorno-Karabakh, and an eventual resolution of the status of Nagorno-Karabakh itself.

Dr. Farid Guliyev is a Post-Doctoral Fellow at Justus Liebig University Giessen, Germany. Previously, he served as a visiting lecturer at the OSCE Academy in Bishkek and as an Assistant Professor of Political Science at ADA University in Baku, Azerbaijan. In 2016-17, he was a Fulbright Scholar at the George Washington University, Washington, DC. The usual disclaimer applies.