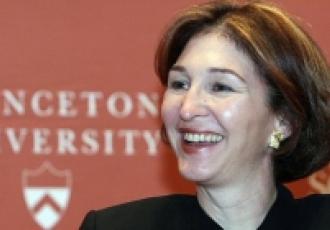 Position
University Professor of Politics and International Affairs Princeton University
Achievements
Former Director of Policy Planning for the United States Department of Stat
Professor of Politics and International Affairs at Princeton University
Anne-Marie Slaughter is the Bert G. Kerstetter '66 University Professor of Politics and International Affairs at Princeton University. From 2009–2011 she served as Director of Policy Planning for the United States Department of State, the first woman to hold that position. Upon leaving the State Department she received the Secretary's Distinguished Service Award for her work leading the Quadrennial Diplomacy and Development Review, as well as a Meritorious Honor Award from the U.S. Agency for International Development (USAID) and a Joint Civilian Service Commendation Award from the Supreme Allied Commander for Europe. Prior to her government service, Dr. Slaughter was the Dean of Princeton's Woodrow Wilson School of Public and International Affairs from 2002–2009.
Dr. Slaughter has written or edited six books, including A NEW WORLD ORDER (2004) and THE IDEA THAT IS AMERICA: KEEPING FAITH WITH OUR VALUES IN A DANGEROUS WORLD (2007), and over 100 scholarly articles. She was also the convener and academic co-chair, with Professor John Ikenberry, of the Princeton Project on National Security, a multi-year research project aimed at developing a new, bipartisan national security strategy for the United States.
Dr. Slaughter is a frequent contributor to both mainstream and new media, writing a monthly column for Project Syndicate, providing commentary on blogs, radio, and television, and curating foreign policy news for over 60,000 followers on Twitter. She has served on many boards, including the Council of Foreign Relations and the McDonald's Corporation, and is currently on the board of the New America Foundation and Abt Associates. She is a member of the Aspen Strategy Group and is a consultant to Google, Inc. Foreign Policy magazine named her to their annual list of the Top 100 Global Thinkers in 2009, 2010, 2011, and 2012.

From 1994-2002, Dr. Slaughter was the J. Sinclair Armstrong Professor of International, Foreign, and Comparative Law and Director of the International Legal Studies Program at Harvard Law School. She received a B.A. from Princeton, an M.Phil and D.Phil in international relations from Oxford, where she was a Daniel M. Sachs Scholar, and a J.D. from Harvard. She is married to Professor Andrew Moravcsik; they live in Princeton with their two sons.